The movie is based on the typography named Helvetica. Helvetica is the famous fonts type used earlier very much. It has a lot of specialties so that they were so much popular.
Massimo Vignelli said that space between the black expresses emotions. Rick Poyner said that Helvetica is clear and informative While Wim Gouwel said that fonts are modern and impressive in clarity and gracefulness. He also said that fonts are neutralized so it reflects only the content.
In older days, there was trend to use the fonts as per message we need to convey. As example, we should use fonts appealing like dog if we need to talk about dog.
In magazines, Coke’s advertisements were written in cursive fonts and with fancy background. Then Coke removed all fancy backgrounds and put just cold drink’s glass and simply wrote a line with Helvetica. That was quite impressive and the message was conveyed with much weight.
The characters of Helvetica are having horizontal styling. The fonts are designed that way that it is much readable even from the distance and they are designed with the all the considerations that a idol fonts should have. The fonts were not any kind of expression it self so it was not appeal anything special while written. That made the fonts more usable because the text we need to write will give the desired message very clearly and it made the fonts used for any purpose.
The fonts have Haao Type foundry. Alfred Hoffman and Mike parker contributed a lot to popularize this fonts. The fonts have firm shape that feel like fonts are so strong on expression and not movable. Leslie Savan said the fonts are accessible, transparent, comfortable, official, clean and efficient.
The fonts became so much popular and were used everywhere. Gradually people started to get bored of the fonts and started not liking them. Though lots of fonts were derived from the Helvetica and people were using it but the popularity of the font ere decreased. Still fonts are really safe to use anywhere because this are the silent fonts will express anything.

Bauhaus (House of Building) was a design school in Germany founded by Walter Gropius. Bauhaus offered courses of arts and crafts. It was famous for the approach to the design that it publicized and taught. It operated from 1919 to 1933.
It was the born of the studies based on workshop training where people just didn’t design on paper but actually made the things.
It provided the platform where craftsmen and designers worked together. Here people designed and experimented. The course was containing 6 months foundation course same as here at NID we have. That foundation course consists of colors’ study and geometry. Students at Bauhaus were guided to use the wastage material to make the products.
The institute became famous and women also started applying so the courses for the women were also added. The courses like pottery workshop, book binding workshop, weaving workshop and textile design.
There were products designed in terms of mass production. Chess sets that contained pieces in shape of their moves. A cradle made of circle, rectangle and triangle with primary colors. Wooden toys made of the primary shapes and colors.
Theatre culture was introduced in the school where all craftsmen and designers together made the costumes made of basic shapes and colors. They played together and interact with each other by the theatre too.
Students there have to do paper work for the design. They had to think like engineers and not like artists.
They made a house in Weimar Park. That was ecologically sound, prefabricated parts were put, cheap to build, easy to run. Its kitchen was like a laboratory. The furniture was made of ceramic and steel mainly. The storage was very good in size that can accommodate good amount of goods.
There was a time of hyperinflation and Bauhaus had designed currency notes also.
The school was closed at Weimar because of political reasons and again started in 1925 at Dessau. In Dessau, the Bauhaus building was made a great example of architecture. It was made of glass, steel and concrete. The windows were placed very nicely so that they can control light of outside coming inside.
The movie shows that chair made here were so popular. Photography was also now started. 20th century was called designed by Bauhaus.
The Bauhaus school was closed finally at its final destination berlin. Still the Bauhaus is alive in their passed-out students all over the world and especially in Chicago. It is known as face of Bauhaus.

The lecture by Prof. Sethu Raman

The lecture by Prof. Sethu Raman was very much about philosophy of design. We learnt a lot of things about approach to design.
He gave example of sparrow. The trapped sparrow in a dark room didn’t know to get out of room by windows because it doesn’t decide the way by sensing light but the wind. So when he opened the door the sparrow got out from the door. From that example I learnt that designer should concern much about the others’ views. Design produces empathy to others.
He further said that we have the knowledge about the world through sensing so called experience. He gave the example of i-Pad that is latest gadget by apple inc. It has been derived and evolved from past gadgets of apple like i-Phone and i-Pod. That device is adapting it self for our better experience.
He said that core of design is planning.
He explained about our brain. He said our right brain stores our sensational experiences and our left brain works like CPU that does analytical tasks. He gave example of learning process of bicycle riding. The experience of riding is continuously being updated in our right brain. Our mirror neurons are being adapted for the memorizing the repetitive activity. Thus we gradually learn to ride the bicycle. He further said that it’s only human who can fantasize and visualize. Visualization is essential for the designer to innovate and perceptions.
He told about good design. He said design must be done in context. In earlier time form was function but now form is just expression. He said product should be like story that narrates its own story.
He said that a designer should always be open and ready to absorb from the environment, should be humble and should be enthusiastic to lead design to the best state.

A lecture by Prof. MP Ranjan based on his life experience and importance of the strategy in design business

Professor gave a very interesting presentation based on his life experience and importance of the strategy in design business. He very well explained the concept of activity theory and its real-time implementations. He said design is much of invisible.
He mentioned fire as a metaphor for design and explained culture is base and material as fuel. The system is surrounded by the environment and intentions and actions generate value by the system and that gives effect.
We knew that how NID was established with the help of key people including teachers and students from foreign. He also mentioned about discipline and culture at NID.
He shared about his life at his father’s toy factory in Madras in 1970. Rocking Horse was the wonderful product that he explained as strategic choice to produce for both the factory and the market. He said that vendor could sell that product directly at any roadside place. There was no need of inventory or showroom to sell that product. People of all the economy classes liked that product.
He also described about his innovative school projects. He preferred work on making prototype rather
than making sketching in lots of pages. He believes that design is actually making things.
He joined NID in 1972 as a faculty even he had his father’s toy factory for good earning. It shows how eager he is to learn about new things.
In NID, he worked in multidisciplinary projects like graphics design, product design etc.
He had to leave NID for 2 years for some political reasons and afterwards NID invited him to join again with an attractive salary. In those 2 years he explored more in business model of his father’s factory as
MD of the firm. He innovate in business model and process of the production, he got brilliant improvement in profit.
After joining NID again, he is called toy man because he had designed a lots of toys. He made wooden rattle toy that is still in production in Karnataka.
He mentioned the Project Jawaja. NID and IIM together were looking after that project and was a great
example of strategic management. They managed to use the bad quality leather in product very useful
way.
He has made a great research on bamboo products design. He inspired craft education in different way and also explained the concept of the footprints and rain drops in context of action research strategy and field implementation strategy. He also explained the importance of relationship between design action (activities) and society (culture). 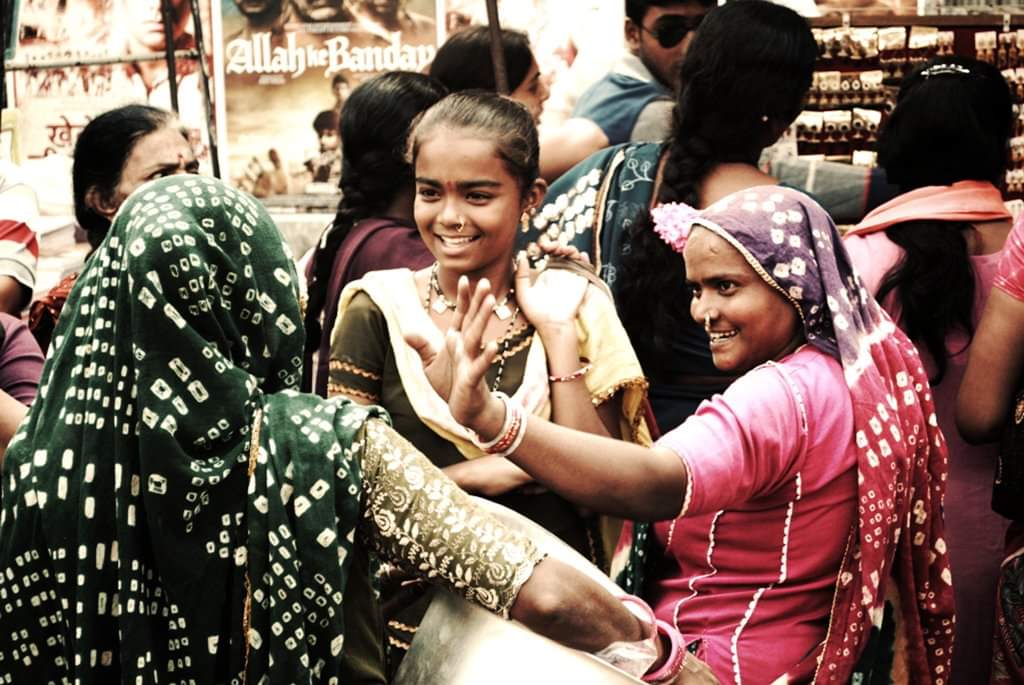 Prof. Pradyumna Vyas said contextual use of technology is design he also said humanising technology is design.
He gave an effective speech. He mentioned Newton’s third law and said we should take care while designing products because that might be used by terrorists or anti social purpose. He said that we should design a product with the context that eliminates the negative effects of the product on the society.
I realized the meaning of the design education. He also made me realized about duty of a responsible designer. As he always does, he emphasized on co-existence of culture traditions and modernization.
In rural India, still traditional lifestyle exists. Well, in urban India, we can see our culture and traditions being lost.
In villages, people have their own culture of living that includes traditional apparels, accessories, transport etc. They are designed by the folks living in that territory. They are designed within the context of availability of resources and requirements. He showed us the photo. In that, a woman is wearing beautiful traditional dress and accessories. The woman looks more beautiful than any other modern woman. That shows our own culture and traditions are really very rich.
In rural India, we can find that people’s livelihood lies in their hereditary occupations.
We studied before NID was structured knowledge. Here at NID, we have faculties and experts coming from urban industries and also from rural-traditional India so that we will get the knowledge of our original culture and traditions of design and also the modern aspects of the design. We will learn contextual design and we should design with the responsibility to lead the world towards progress. We should make sure that we do not harm our culture and traditions and lead them to evolution and existence.